This is Neil Montgomery with Fizby Nation for our first Whiteboard Wednesday.

Now, I’m sure your first question while watching this is, “What is Fizby Nation?” Well, Fizby Nation is for individual inventors that have an idea and ultimately want to see it on the marketplace and start making some money. This doesn’t sound too hard, right?

Now, this is for all of you that said, “That product was my idea! I should’ve done something with it” or “I would’ve been a millionaire right now only if I did something with my idea.”

So, the purpose of these whiteboard wednesdays is to provide a free resource to educate and inspire inventors to get started on their inventions with quick, simple, educational and fun videos.

First of all, the name Fizby came from For Sale By Inventor. If you take a look at it–FSBI. People who are familiar with real estate, “For Sale by Owner”, they call them FSBO’s. So, for intellectual property and For Sale By Inventor, we will call individual inventors “Fizbys”, and our mascot is our Fizby Robot. 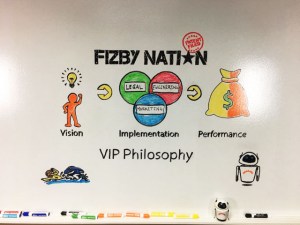 So, how do you make money on an idea? The first step is, you’ve gotta have an idea. So many people fail at this first step, and we’ll get into videos that explain how important it is getting this first step right. The last step is performance, or profit. Now, these are the two easiest steps for getting an idea and making money off of it. Certainly the easiest in terms of how much effort is involved in doing this. The middle part is what we’ll be focusing a lot of our time on, and this is the implementation step.

Now, if there’s any SouthPark® fans, you guys may remember the “Underpants Gnomes” episode. There were these gnomes that would hide under the characters’ beds, they would collect underpants in hopes of generating profit. So their first step is collect underpants, the last step is collect profit. They could never figure out what to do or how to make it. They always visited their factory, they had tons and tons of underpants, they were wondering why they kept losing their underwear. The gnomes were stealing them to make money, yet they couldn’t figure it out. That was the exact analogy that a lot of people have when they first start out. They get the idea, they know what they want, they’re just not really sure how to do it.

For inventing, the three things you need and have to master and bring together is the legal component (so getting your patent), engineering (making it work), and marketing (having something that someone wants to buy.) Only having two out these three is like having a two-legged stool–it will never stand up, it will continue to fall down. So that’s why we’re doing this–so we can be able to swim with the sharks.

For the Shark Tank fans out there, this is what you need to do in order to be successful. Our further videos will address that. I’m Neil with Fizby Nation, and we’ll get started on our next Whiteboard Wednesday.