How to License Your Invention for Royalties

This page was created to help inventors understand invention licensing and royalties. We’ve included a video, an infographic, an example, and an invention royalty calculator to help you understand this process better.

To define what you own with Real Estate Property, a surveyor marks off your land so you know exactly what you own. After you get the deed for your property, it is yours to build and live on or rent out for money.
With your patent, or Intellectual Property, your patent attorney writes claims in your patent that define what you own similar to the description of your Deed. The patent prohibits someone from legally making and selling an invention without the patent holder’s consent.

Licensing your invention is very similar to renting out your Real Estate Property. Instead of receiving rent payments, you receive royalty payments from the sales of your product.

Here’s an example of how Royalties work using a hammer as an analogy. 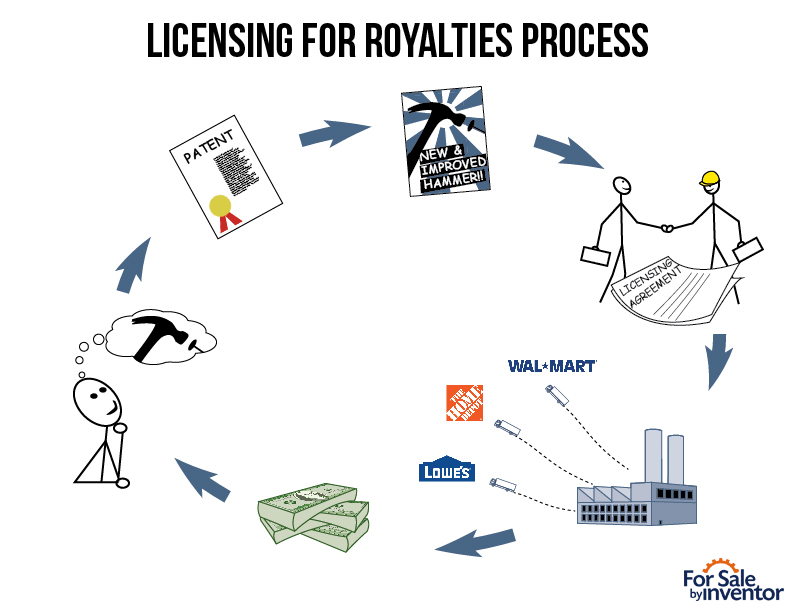 Instead of making and selling the hammer which would require much more time and risk, the inventor could decide to pursue a licensing arrangement with a manufacturer to produce it and sell it into mass retail chain stores like The Home Depot™ and Lowe’s™.

If the hammer retails for $20.00, a typical 50% profit margin for a big box retailer would have a wholesale cost of $10.00. This wholesale cost is the price the retailer pays to take inventory of the product and sell at their retail locations. In many cases, retailers will receive more than 50% with large quantity purchases, fast pay discounts, rebates, new store discounts, etc.

Now, let’s say the inventor’s licensing deal with the manufacturer earns a royalty of 10% based on the wholesale cost. Royalty rates vary based on different factors but we’ll use 10% in this case because it makes the numbers easier to compute and understand. That means that the hammer inventor would earn a royalty of $1 per hammer sold at wholesale. This is because the inventor would earn 10% of the $10 wholesale cost of a $20 retail price hammer.

$1 may not sound like much in this day and age. An important thing to consider though is that a lot of manufacturers already have their supply chains and distribution in place already. In the United States alone, The Home Depot™ has about 2,200 locations with Lowe’s stores coming in closer to 1,800. If each store puts in a conservative 10 unit purchase order for each store for the holidays, the inventor would make $40,000 dollars on the first order. If the product was also lucky enough to get into Wal-Mart™, this initial order would soar to $90,000 with their 5,000 U.S. locations.

Licensing is appealing for many inventors on a budget because it avoids the big upfront costs of starting a business and launching a product on their own. Of course there is no guarantee of success if you choose this route but it does significantly mitigate the risk of product development.

It is vital, however, that inventors pay careful attention to protecting their invention with a well crafted patent before exposing or advertising their invention. Manufacturers could easily take the idea for free leaving the inventor with no options. Advertising an invention without legally protecting it first could put your product in jeopardy, especially with the new “first to file” patent laws.

Bottom line, make sure to speak with professionals before venturing down this path. Your invention is worth too much to let it slip away because you were trying to save pennies by cutting corners.

Clients of Montgomery IP Associates and ForSalebyInventor.com have all taken the necessary steps to properly protect and market their invention. Please contact us directly if you have any questions regarding how we can help you with your invention.