The Secret Formula To Invention Success

“To every man there comes in his lifetime that special moment when he is tapped on the shoulder and offered to do a very special thing. What a tragedy if that moment finds him unprepared or unqualified for the work which would be his finest hour”

The Holiday Season takes us into a special time of year for inventors.  Products that once existed only inside the mind’s eye of an inventor are now visible to all in kiosks, window displays and store shelves ready to be purchased.

Have you ever wondered, “How did these products get here?”  Well, as you may know, finished products have been run through the gamut of prototyping, market testing, and rounds of product development before getting to a store shelf.  Even simple products like the Snuggie® or the Sham- Wow® have gone through multiple product designs and market testing before being launched on a mass scale.  There is really no such thing as an overnight success on the mass retail marketplace.

This is what is invisible to the consumer when standing in the checkout line this Holiday Season in their local WalMart®.  They don’t see the inventor toiling away in the wee hours of the morning over a final product design.  Nor do they see the multiple rounds of packaging design edits the inventor had with a graphic designer.  There are countless decisions to be made and many sleepless nights that the inventor must endure to see their vision through and their product being featured as a door buster sale on Black Friday.

This is where success is either made or lost. This is the marathoner running 10 miles before work in the ice cold morning preparing for the big race. The ultimate winners and over-achievers make it look easy because they put in all the hard work when everyone else isn’t paying attention.  Success is earned in the preparation and the final result is simply the reward. 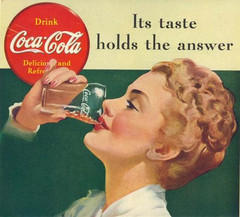 To illustrate this point, let’s look at a pharmacist from Atlanta who had many failed inventions.  These inventions ranged from hair dye to cough syrup to liver pills and finally to a headache medicine that he couldn’t get to work right.  One day, frustrated with the poor results of another invention, he caught two young employees mixing his headache solution with water because, as they explained, it tasted good.  Instead of scolding them, the pharmacist saw this as an opportunity and adapted their new formula with soda water to make it fizz.  That Atlanta pharmacist was John Pemberton.  You may recognize his headache solution invention mixed with soda water.  It is a secret formula you will see in most households this weekend called “Coca Cola®.”

This phenomenon of wild success is not brand new, nor is it by accident.  6th Century B.C. ancient Greeks sought to identify certain traits among common people that were able to rise above the crowd that is still true today.  One trait they isolated was not luck – it was perseverance.