Post-It® Notes — It Wasn't An Accident 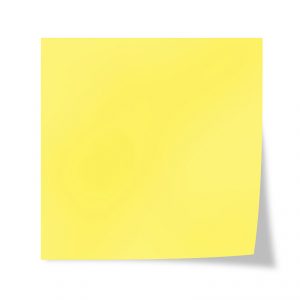 The story begins in 1968 with Dr. Spencer Silver, a research scientist (aka: company employed inventor) working for the 3M Company. According to legend, Dr. Silver was attempting to invent a super strong adhesive but failed, instead he invented the adhesive called Acrylate Copolymer Microspheres which would someday become the stickum for Post-It® Notes by 3M. The story, like most legends, is great for Hollywood but a bit short in reality.
Silver was simply tasked with inventing new adhesives that 3M could later develop into commercial products. The beginning of Post-Its was the result of normal research and experimentation by a professional and not a fortunate accident.
Spencer Silver holds 22 patents, but it is his 1972 Patent #:3,691,140 for a low-tack, reusable, pressure sensitive adhesive that would eventually bring him fame. Silver’s initial thought was to make his new adhesive into a spray, or possibly a tacky surfaced bulletin board on which to place and remove temporary notes. It seems almost impossible today to think that Dr. Silver’s adhesive would languish within the 3M corporate world for five years without being developed into a product, but that’s reality.
In 1974, 3M Product Development Engineer, Arthur Fry, enters the story with his attendance at one of Silver’s internal seminars promoting his adhesive. It was not immediately a “eureka moment” for Fry. According to 3M, the “eureka moment” came sometime later while “Fry [was] singing in the church choir. His bookmark kept falling out of his hymnal, causing him to lose his page.” To solve his problem, Fry used some of Spencer’s pressure sensitive adhesive on his bookmark. Thus, a product concept was born.
Although a need was found and a solution in place for a viable home and office product, 3M waited three more years to take a chance on releasing the new product to consumers. Many in the company were unconvinced of the Post-It Notes’ commercial potential. In spite of the naysayers, the product was launched in 1977 and promptly failed.
A year later 3M tried one last time to launch Post-It Notes by flooding Boise, Idaho with thousands upon thousands of free samples. The test was phenomenally successful with 90% of the users wanting more. Post-It Notes hit the United States market in full force in 1980. Now thirty years later Post-It Notes are found in virtually every office and many homes around the world.
Contrary to legend, the invention of Post-It Notes was not a happy accident, but rather, the happy result of hard work and persistence.