How To Make Money On Invention Ideas

No week passes by without at least one “would-be” inventor telling me that they have a billion-dollar idea and they want $1-million dollars upfront plus 10% royalties. Sounds good to me – no argument here. A million bucks upfront is exactly what I want for every one of my clients. 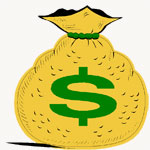 Getting the $1,000,000.00 upfront might be a little bit much to ask for by an unknown inventor with an unproven invention, and unfortunately, it probably is not going to happen. Nevertheless, there definitely are some billion dollar inventions in the marketplace. Lipitor, the popular cholesterol drug by Pfizer, grosses more than a billion dollars a year as does the game changing Apple iPhone. Although these products are two that quickly come to mind, there are many more.

So let’s see where the money is being made on those billion-dollar inventions. For our purposes, we’ll use the very popular iPhone which just launched the latest generation iPhone 4.

This is absolute proof that innovation is more profitable than fabrication. The greatest amount of money on a product is generally earned by the patent holder. Although manufacturing jobs are often outsourced to other countries, it is the American ability to out-think and out-create the world that makes the United States the world’s greatest economy. People imply that China is creeping up, but as you can see above, China is merely a source for cheap labor making pennies while American companies make the big bucks.*

Now of course, the iPhone wasn’t invented one evening at the kitchen table by Steven Jobs and placed on store shelves the next morning. It took years of research and development, trial and error, sweat and tears on the part of many talented and high priced individuals to create the original iPhone. Then even more time to improve the product through several generations to the version we have today.

So how good is the USA when it comes to innovation? It is 2 times better than the rest of the world combined. With twice the innovation power, America is more than capable to overcome any economic problem.

* China’s cheap labor may be coming to an end sooner than later. In the past year, costs have increased 18%. The higher costs are expected to grow even higher as the country develops a real middle class. China will soon learn that it’s impossible to put the capitalist genie back into the bottle. People everywhere want a better life for themselves and their children. Making it even tougher on China, is the increase in the cost of oil that they need for their own consumption as well as to ship parts and finished products to the United States and Europe. China is just a source for inexpensive parts and cheap labor with both costs growing higher everyday. Soon the world will be looking for the next place that has cheap labor and China will no longer be the place where everyone goes. Remember – it is better to innovate than it is to fabricate!