The invention is a device intended for people who do not like to hold or touch a fish, especially for photographing purposes. 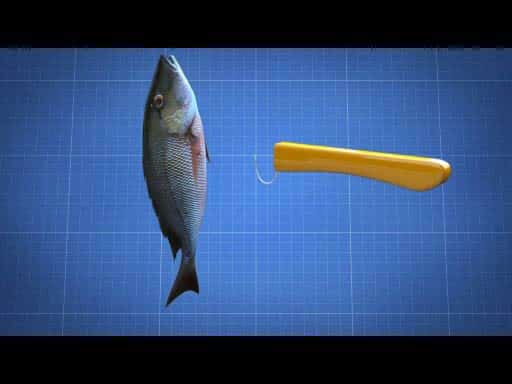 It is a common practice to take a picture of the prize fish at the end of the day along with the fishermen who caught it. However, many children, women, and even men are too squeamish to hold a live fish even for a short period of time for a photograph. This usually means that someone else must stand in the picture holding the fish thus creating confusion in future years as to who actually caught the fish. Another solution is to have someone else hold the fish in the picture from the side. However, this is a difficult task as one's arm is frequently stretched to its limit and often results in the fish or the fishermen being out of focus. Inventor Pybus has created a means by which anyone can easily hold a fish for a photograph, regardless of their levels of squeamishness.

This clever new invention can either hook into fish or be held underneath. It does not hurt or damage fish, and is perfect for photographing. The use of the Fish Grasping Device allows for even the most squeamish of fishermen to hold their catch for a photograph.