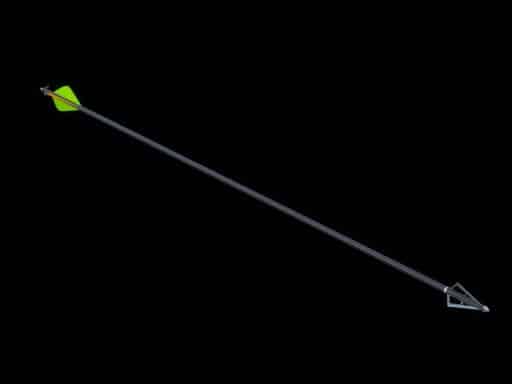 Inventor Joseph Andrus of Geneva, OH has designed a system and method by which hunting arrows are provided with a line style tracking mechanism.

When a bow hunter strikes his game, he is often faced with subsequent tracking of the animal as it can live for several hours after being hit, depending upon the accuracy of the hunters shot. When this occurs, several things could happen. The game could run so far and so fast that the hunter never catches up to it or the wounded animal could be attacked by other wild animals thus ruining the meat. Also, instances have been known to occur where other hunters come upon the wounded game and claim it as their own. The difficulty experienced in producing an accurate shot with a bow increases the likelihood that it will not produce an instant kill, thus making tracking necessary. Furthermore, these problems are compounded in the situation where the hunter is hunting at dusk, dawn or in cloudy/foggy situations where visibility is limited. Inventor Andrus has created a means by which bow hunters can track their arrows to aid in their retrieval as well as the location of the injured/killed game animal.

This clever new invention is perfect for use in any weather condition or time of day. It saves money since arrows are found and can be reused. The line in which the animal ran is established from the beginning and ends wherever the animal stops. The use of the Arrow with Animal Tracking Means ensures that the hunter can quickly locate the arrow and the game.